The end of press freedom and human rights in Turkey? 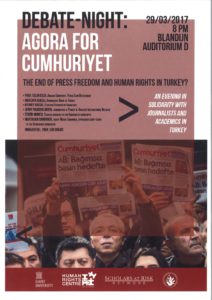 Why this debate?
During an Erasmus exchange in the fall of 2016 in Hamburg, one of our students, Blanche Devos, met a Turkish student, Muratcan Sanbuncu. The breezy Erasmus atmosphere changed when the news came out in October that Muratcan’s father, Murat Sanbuncu, chief-editor of the Turkish  newspaper Cumhuriyet, was arrested in Instanbul.

The arrests of more than 10 Cumhuriyet journalists were based on unfounded claims. Similarly in February, Turkish authorities struck at universities, dismissing without good cause 330 academics at 49 universities.Under the state of emergency, Turkey is destroying the freedom of expression of the press as well as academics, thus undermining democracy.

Following the great success of similar events that were held at the Sorbonne University in Paris in December and at the Bucerius Law School in Hamburg in January, Muratcan and Blanche will host this event with the support of the Human Rights Centre and the Scholars at Risk project at Ghent University.

A get-together will take place after the event.