The legal status of women, particularly married women, in Congolese law: with a case study on Nande women in North Kivu

Rémy Kababala Vutsopire was a PhD Research Fellow at the Human Rights Centre of Ghent University from June 2009 until December 2015. He is lecturer at the University of Graben in Butembo, DRC Congo. He studied law in this university where he obtained his Bachelor Degree (2004) and his Masters (2006). Rémy defended his doctoral thesis on 18 December 2015 and promoted to doctor in law.

This thesis analyses the recognition, the promotion and the protection of the rights of Congolese women in a legal pluralist context (written law – customary Nande law). This analysis focuses on the women’s status and the women’s rights, in particular the rights of the married Nande woman in DR Congo.

Customary law imposes a framework of movements and actions on women: they are assigned well-known social roles. In the traditional communities in the DRC, their protection is taken care of by the group, taking into account their social roles of mother and wife. 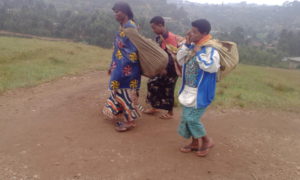 The written Congolese law on the other hand stipulates certain limitations to the legal capacity of women (art. 315 Family Code). Moreover, according to Art. 448 Family Code, a women needs authorization of her husband to undertake valid legal acts. She is placed under the authority of her husband, the head of the family, who she has to obey. Questions can be raised regarding the relationship customary law – written law. Customary law is of a communitarian character, meaning that is privileges the social roles as parts of the community and merits individual rights less. It ascribes women a social role limited to the role of mother and wife. In this regard one may ask legitimately whether this has the potential to promote and protect women’s rights.  The women is excluded from the political life of the group, she is not allowed to participate in conflict management, even when she is at the basis of it. However, despite the fact that women are usually underprivileged by customary rules and practices, all traditional and peasant communities – including the women part of those communities – rely massively on custom to arrange their daily life.

Nevertheless, it must be recognized that written law guarantees certain rights that are unknown in custom. These include land ownership, inheritance rights, and legal capacity in certain domains (business and employment law).

Consequently, the main question of this analysis is as follows: how can the Congolese state guarantee women’s rights in general and those of married women in particular, in a context of legal pluralism, in which customary law – the most frequently used source of law by the population – puts them in an inferior position?