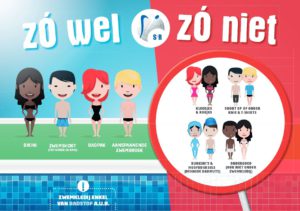 In the summer of 2016, the “burkini”, a full body swimwear, made headlines all over the world, when a number of French coastal municipalities decided to ban it on their beaches. The French Conseil d’Etat decided thatthese regulations form a “serious and illegal interference with fundamental rights, such as the right of free movement, the freedom of conscience and the personal freedom”. Nevertheless, the majority of swimming pools in Belgium, in particular municipal swimming pools, have been banning full body swimwear for many years. In addition, many municipalities also prescribe the length and shape of male swimwear. At the same time, separate swimming hours for women – attracting in the first place Muslim women – have been in place in some of these municipalities.

In this research project, swimming pools regulations will be analysed from a gender perspective, as well as from a broad human rights perspective (including religious freedom, discrimination, and minority inclusion). The project has an action research component, as it is interacts with the HRC’s legal clinic, which is supporting a number of Muslim women in bringing discrimination claims – on the basis of religion, gender and/or race –  against municipal ‘burkini bans’ before the Belgian courts.

Other research in Rights of ethnic, cultural and religious minorities

‘Invisible rights and the importance of casting the net wider